In recent years, it has become more and more common to find apps on your smart phone to assist in paranormal investigations. One type of app was started by something called “Ghost Radar.” These apps claim to use the sensors that are inherently present on your smart phone to detect paranormal anomalies and allow them to communicate using a word bank that they can choose from (provided by the app itself). So why don’t we use it?

The Scientific Reason: On his website, Jones notes that the Ghost Radar “cannot be verified scientifically and therefore should be used for entertainment purposes.” That’s a big red flag already. Secondly, when the app originally came out, it claimed to be able to detect EMF. However, the company has erased all trace of that claim in further updates after several investigators tested this by comparing the EMF output from the app versus that of an actual EMF detector. Another, even larger red flag. If they are willing to claim that an app does something that is easy to prove false, why would they not also then make even bolder claims about its capabilities so that they can make some money off of the blossoming paranormal community?

Another issue with the app is the word bank. Confirmation bias is a psychological phenomenon where the mind tends to interpret new evidence as confirmation of  existing beliefs or theories. Basically, any word in the word bank could be latched on to by the brain and used to strengthen the beliefs or preconceived notions that you may have. For example, if you are in a house and turn on your Ghost Radar app, you are already making the assumption that the location you are in may be haunted. When the app spits out a word, your mind will then tend to take that as a sign that you were correct in your assumption, and then extrapolate that the word is a message from the entity. However, that is simply not the case. 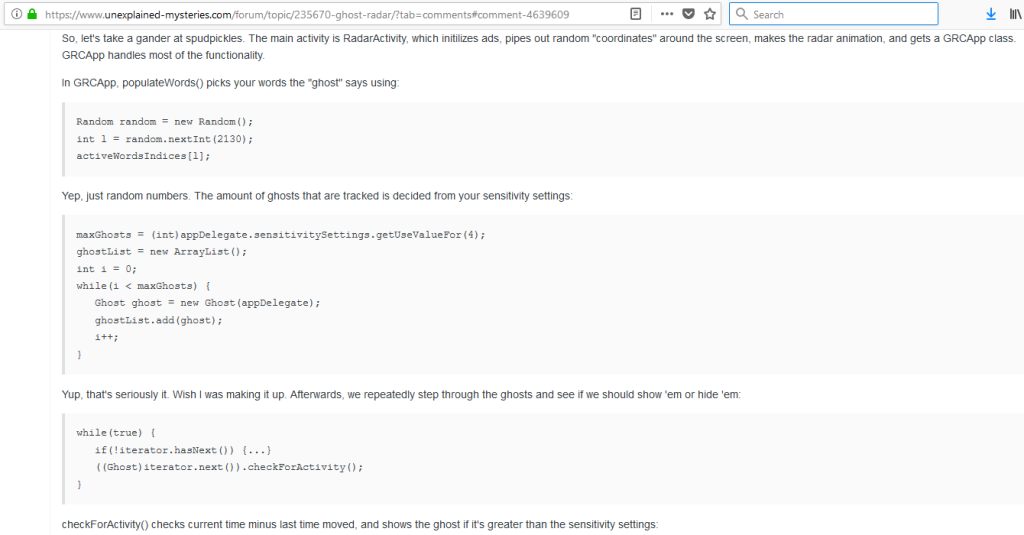 As shown in the screenshot above, user “Alien-Embryo” (who claims to be using a dummy account to post his findings) of Unexplained-Mysteries.com went a step further and actually reverse engineered the app itself, delving into the code and showing us exactly how the app itself works (despite the fact that the End User License Agreement specifically prohibits this). His findings were, sadly, that the Ghost Radar app uses a simple random number generator to choose a word from the list and display it on the screen. This means that the app does not do anything that it claims to do as far as monitoring sensors; it simply displays a random word from its bank of 2130 words. The same was found for the ‘radar’ part of the app – depending on the sensitivity you set in the options, the app will use another random number generator to decide whether or not to display a random blip on the screen. Yet another random number generator is used to decide when the ‘ghost’ blip moves around on the radar.